Problems are usually noticed sooner, before they become widespread

Bonsai are as susceptible to pests and diseases as normal sized plants and trees of that variety. However, being a more manageable size and receiving closer attention than the average houseplant or garden tree means that problems are usually noticed sooner, before they become widespread. On the other hand, due to their diminished size, bonsai may not be able to withstand a determined attack. Vigilance is of the utmost importance. 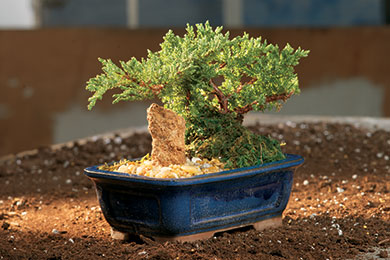 There are many available insecticides, each suitable for a specific insect and not necessarily suited for them all. Sometimes the first thing to try is to try picking or washing the insects off. A good rule to follow is to use the least dangerous method that will do the job. An insecticidal soap, for example, is very safe for humans, but must be rinsed off plants after spraying, as the fatty acids will eventually cover the pores on the leaves. It has to be sprayed fairly often, as it must contact the insect and has no residual effect. It must not be used on some plants (notably Serissa), so read labels.

Some of the more common insects and appropriate methods of control:

If you are not sure what the problem is, do not spray to see if it will work! It is very easy to do more damage than the bugs could! Ask our certified pesticide dispensers, or bring a leaf to us we'll be able to help. Be cautious with chemicals, and READ LABELS!